This post is the first in a series that plans to document my progress through installing and configuring an OpenStack Lab, focusing predominantly on the configuration of the network components.

I’ve recently taken an interest in a few different topics. These are, in no particular order:

As I’m a person who likes to learn as much as possible when I’m not procrastinating, I thought it best to build a lab network that would use all above technologies and document my progress.

I’ve drawn some quick diagrams that I’ll be using when setting up the lab.

The first network interface (as adapter 1 is Cumulus’ management interface - “eth0”) on all switches will connect to a bridged adapter on my host machine (which also has access out to the internet).

I’ll also be creating three Ubuntu server 18.04 VM’s - one ZTP server and two to take part in the OpenStack ‘cloud’. Each of the server VM’s will have its’ first network interface connected to the bridge adapter too.

And the production network diagram: 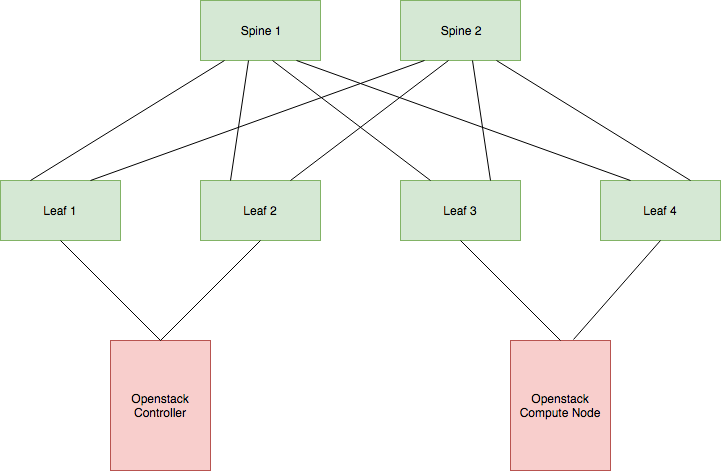 After some initial research into both OpenStack and Cumulus (and using them together) I’ve decided to go with a leaf/spine network design. I’ve chosen this to become familiar with the most common data centre network design out there in 2018.

The two OpenStack servers will each have two interfaces connected to two ‘top of rack’ (leaf) switches, through which they will talk OSPF and BGP.

I’ll go over the more specific choices when we get around to configuring the switches.

This was a quick post, meant as a foundation for the rest of the series and for me to document before I start configuring anything.

The next post in the series covers the use Vagrant to set up the environment in VirtualBox.